Ever since music producer “Bruce Dickinson” (more specifically, “The Bruce Dickinson” as performed by Christopher Walken) tells the band they have “what appears to be a dynamite sound” but they need “a little more cowbell,” this commonly-maligned percussion instrument gained musical immortality.

But, as funny as the legendary Saturday Night Live sketch is, the cowbell has always held its own throughout musical history. Far from being a ironic punchline (well, maybe not too far), the cowbell is a primary voice in countless hit songs.

To kick off our latest sample release — the “More Cowbell” Series of Cowbell samples —  we’ll take a look at our favorite nine cowbell classics.

Why? Because you gotta have more cowbell, baby!

The song behind the legendary joke, Blue Oyster Cult’s 1976 was nearly a Top Ten hit peaking at #12. Maybe if the cowbell had been brought up more in the mix, they wouldn’t have had to wait until 1981 to reach #1 (which they finally did with “Burnin’ For You” This one is a such a no-brainer (and obvious choice) that we can’t rank it any higher on the list.

This 1975 Nazareth hit takes its name from a time-honored hangover cure. Whether that actually works or not is debatable. The infectious cowbell use right from the start is not.

Cowbell in the intro, and more cowbell during the pre-chorus, the only thing that rocks harder than cowbell is Leslie West’s punch-in-the-gut riffing. A no-doubt rock classic, Mississippi Queen was Mountain’s most successful single commercially, peaking at #21 on the 1970 Billboard charts. And, from the first couple of hits, you know this is a cowbell that is being hit hard. Given the song, it’s seems the only right way to play it though.

Wild Cherry’s 1976 sold over 2 million copies and has been played by every funk bar band ever since. With a small cowbell sound that cuts through just right, you’ll know how much of that funky groove depends on that overdubbed ‘bell. Don’t believe us? Some of those aforementioned funk bar bands try to sneak this classic by unsuspecting audiences without the cowbell part. And, for that, there is no excuse.

The second song recorded by the Jimi Hendrix Experience, the cowbell is not the primary hook by any means. This overdubbed cowbell part played by drummer Mitch Mitchell holds its own, though, for its persistence throughout the intro and verses. The cowbell’s role as a timekeeper is undeniable and this track clearly showcases that ability.

Yet another song you’ll recognize once you hear that cowbell. War’s song peaked at #7 in 1975 and some could argue it’s precisely because of that infectious cowbell rhythm that kicks off the funky bass line and groove that defines the rest of this all-time classic.

Some will cry foul on this pick. Mötley Crüe? Cowbell? You’ve got to be kiddin’ me! Well, we’re not kidding and here’s why. What makes this song such a legendary use of the cowbell is because it uses the percussive knocker in a way totally unlike every other song on the list. The cowbell on “Live Wire” is not used for an intro, not used as a voice throughout the main grooves, and not used to solidify time for a shaky drummer. No, it doesn’t do any of these things. What it does do — and boldly at that — is use the cowbell as a fill. And, it doesn’t even pop up until the final ten seconds of the song!

Sure, we know about all Tommy Lee from the infamous video with the Mrs., but his big balls never get the credit they deserve.

You’ll know this song within the first hits of the cowbell — that first measure of cowbell riffin’ establishes the feel, attitude, and time of this timeless Rolling Stones’ hit. Played on a small, steel hand-held cowbell, this famous rhythm goes to show you it’s not the size of your bell that counts (sorry, that damn Tommy Lee fill is still in our heads).

And, now, the one you’ve been waiting for, the number #1 iconic cowbell song (at least to our ears):

From the iconic intro to the verses, cowbell is all over Grand Funk Railroad’s first #1 single from 1973. Can you imagine this song without the cowbell? Don’t even try.

Did we miss any? Let us know with a comment. Until next time, just remember: you gotta have more cowbell, baby!

Ready for some of these iconic cowbell samples in your music? If you have the fever, we’ll give you the only prescription.. more cowbell! 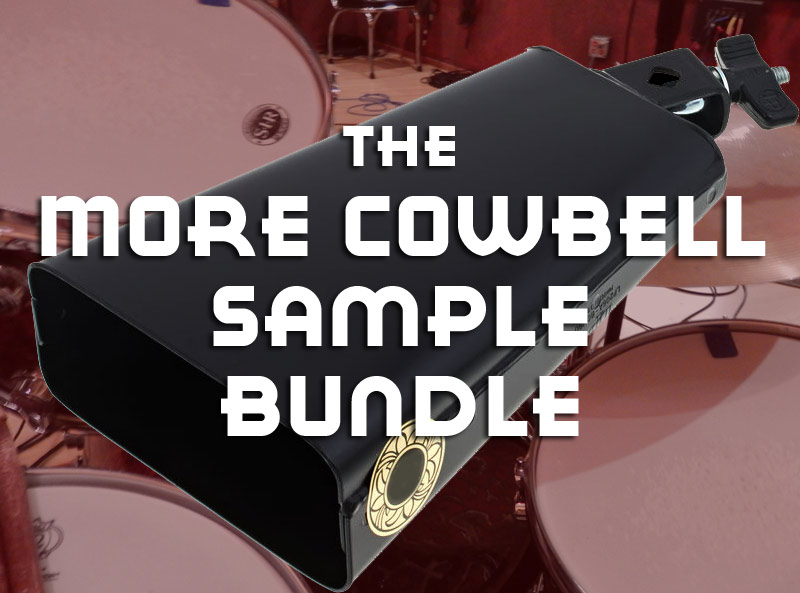